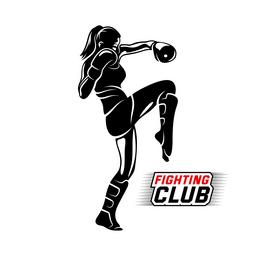 A place for women boxers to come and knock each other out!

An all Women's Boxing Gym where we can hang out and punch each others lights out.

Blows that hurt: where to give them, how to avoid them. For a quick knockout, aim for the temples, liver or chin. Lovers of undermining prefer to go after the nose. In a heavyweight championship, each fighter averages about twenty punches per round. Hit hard by athletes of a quintal, they have dreadful and sometimes fatal consequences. If they don't pull off the KO decision every time, their power and repetition wears out the opponent. The points of impact. During hostilities, a boxer's upper body is a set of targets for the opponent. The infographic opposite lists the main points of impact, with the consequences they can have. The guards. Opposite, the small silhouettes show specific means of protection. While knowing that the fighters are, theoretically, constantly on the move and that in boxing, the best defense is the attack. The most rigorous and impermeable protection possible must be accompanied by preparation for blows. So as not to suffer the fight. The liver knockout. The liver is a richly innervated region. But, unlike the cerebral area, the neurovegetative impulse here is very slow: a 2CV, compared to the Ferrari of the brain. Unlike a knockout in the head, where the boxer is out, sometimes without pain, the knockout in the liver is only due to pain. The shock wave radiates to the nerve plexuses of the hepatic regions. The pain travels up the nerves to the brain in two or three seconds. There, due to the pain, an arrest of abdominal muscle contraction occurs. The boxer bends and falls with a delay (between three and five seconds) after receiving the blow. It is obviously a postural knockout. KO in the face: Hooks or uppercuts cause a sudden and violent rotation of the head. The brain, floating in the cranial box, follows the movement with delay and hits the internal face of the skull. At this time, the centers of balance (eye, inner ear and neuromuscular spindles of the neck muscles) are violently disturbed. They no longer transmit information to the nerve centers controlling muscle tone and coordination of movements. This is the postural knockout. In the case of a brain knockout, the boxer briefly loses consciousness. Great confusion ensues: temporary amnesia, disorientation in time and space. This often results in minor cerebral edema leading to headaches. The consequences are more serious (coma, death) if the shock causes the rupture of one of the bridging veins.

I added into this Federation because I saw the amazing Natalie, the superb Sabrina and some other high-level cyber-boxers ... so hopefully there's some good matches and matchups coming out of here...

This is not the correct Federation Patricia :) and we already have a Female Boxing Federation, Just check girls!!!!!

i want fight against stefy boxe

4 comments
Forum
There are no forums yet.
New Members